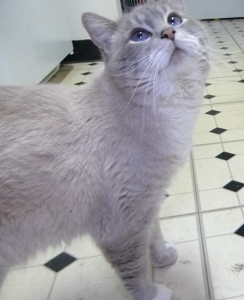 Anyone who has been watching the Talking Kitty Cat series already knows that Gibson has passed away. What most viewers want to know is “How did Gibson die?”. Please stop reading if this subject makes you sad. Theres no shame in pressing the back button. What you’re about to read is sad.

The truth is, Gibson had been sick his whole life. His bladder and kidneys were prone to infections quite often. With multiple visits to veterinary hospitals and routine check ups, we were able to cure him with injected antibiotics when needed.

When really bad infections would happen, Gibson would bleed from his penis. This was a sign that he needed immediate attention.

Shelby (our black lab) was in heat during the time. Although she wore a doggie diaper while in the house, we took it off of her when she was in the back room so she could clean herself. Gibson and Shelby were best friends and spent a lot of time together, meaning that Gibson spent most of his time in the back room to be with Shelby.

A female dog in heat will bleed from their vagina for weeks. We noticed little blood spots on the floor, but we assumed that the stains and puddles were from the dog. Eventually, we noticed that Gibson was acting strange and seemingly sick.

I gave him his antibiotics in hoping that all would be well, but I was too late. By the time I found him to administer his second dose of medicine, he was lifeless.

I placed his body in an area that he had always been interested in (a giant crab grass patch behind our house). He had a proper burial. I cried more times in the next few weeks than I can recount for after losing him. It was a mistake by not paying enough attention. Sure, I could blame the dog for this one, but ultimately no one is to blame.

All I know is that I miss him. So theres the story. That is how it happened. Shitty, sad and totally uncontrollable. We did what we could, but it will never feel like we’d done enough. I sure miss my Gibby! 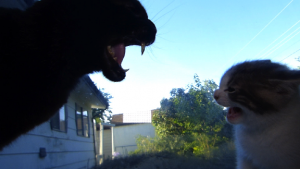 END_OF_DOCUMENT_TOKEN_TO_BE_REPLACED

Pause For The Cause